PM Modi will inaugurate the National Animal Disease Control Program at a function held at the Veterinary University.

Prime Minister Narendra Modi reached the stage, the pandal echoed with the Modi-Modi slogans. PM Modi shook hands and greeted everyone. First, PM Modi launched ‘Swachhata Hi Seva’. This time this campaign is being run against plastics, which will run from 11 September to 2 October. PM Modi also launched various schemes in the field of animal husbandry and milk production.

Earlier, Union Livestock Development Minister Giriraj Singh welcomed the Prime Minister. He said that the steps taken by Modi ji for the interests of farmers are welcome. Animal husbandry along with animals will also be benefited from these schemes. Addressing the program, Chief Minister Yogi Adityanath said that Prime Minister Narendra Modi is going to do Lord Krishna’s city today. The Swachh Bharat Mission, which was launched by the Prime Minister, is the result of the same mission that the disease like encephalitis is towards end today. This is why we also get the inspiration for a plastic-free India today. During this time, Yogi also presented data on the decreasing number of encephalitis patients. 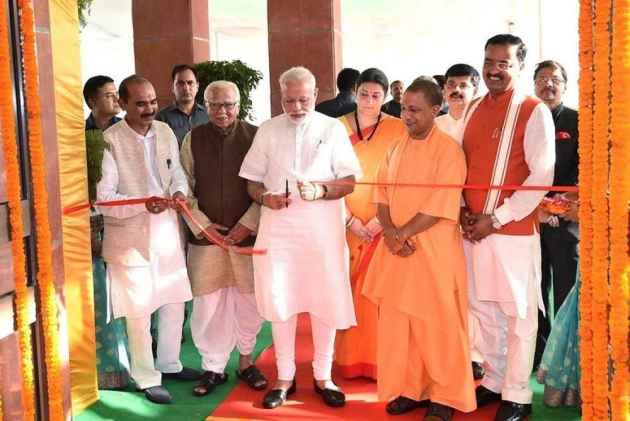 Prime Minister Narendra Modi has given a message to make the country and the world a ‘plastic-free India’ from the land of Mathura. PM Modi learned the tricks of plastic management by sitting with 25 women picking up plastic waste. Get information about where to keep it, etc. PM Modi also honored these women during this period and closely understood the problems faced in their works.

The National Animal Disease Control Program aims to end deadly diseases in animals in the next five years. During this time a countrywide artificial insemination program will also be started. Through this campaign, 200-200 cows of 100 villages each in 600 districts will be artificial insemination in the next six months. For the first time such a big program is being done in the country to improve the breed of cows.