Kejirwal said BJP Government is Dividing the Society on the Basis of “Caste.”

kejriwal said Modi has Failed to Benefit the Farmer Community

AAP national convener Arvind Kejriwal Saturday hit out at Prime Minister Narendra Modi over his government’s crop insurance scheme alleging it has failed to benefit the farming community and charged the NDA with dividing the society into caste lines.

The Pradhan Mantri Fasal Bima Yojna (PMFBY) is aimed at enabling farmers to avail insurance cover against crop loss due to natural calamities.

“Ahead of the 2014 Lok Sabha polls, Modi promised crop insurance scheme… Now, if a farmer’s crop gets destroyed, the insurance firms refuse to give compensation to them saying that it is only applicable if over 70 per cent crop is damaged,” Kejriwal said addressing a rally for the Jind Assembly bypoll here. 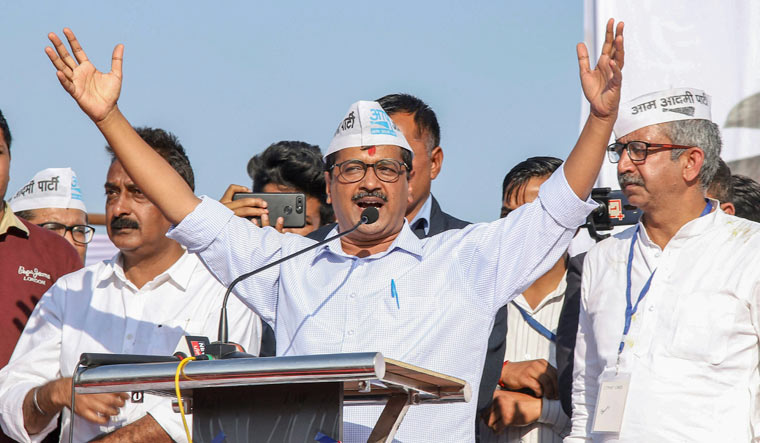 The bypoll for the Jind seat is scheduled to be held on January 28 and was necessitated following the death of INLD MLA Hari Chand Middha.

Kejriwal claimed that Modi’s promises to benefit farmers by way of crop insurance scheme have failed to yield the result and alleged that the prime minister also did not implement the Swaminathan Commission report as was assured by him before the general elections in 2014.

“I urge the electorate that if Modi and Haryana Chief Minister Manohar Lal Khattar come to seek votes for the BJP, then ask them to get these from insurance firms,” the AAP national convener said.

“In Haryana, if farmers approach Khattar for compensation of damaged crops, they are told by the chief minister to go to insurance firms,” he said. The Delhi chief minister said that his government had been giving compensation of Rs 20,000 per acre to farmers for loss of crops due to natural calamities.

He also accused the BJP of dividing the society into the lines of caste.

“The BJP government at the centre and in Haryana has been dividing the society on the basis of caste,” Kejriwal alleged, adding that he had never seen the kind of casteism which he being followed during the BJP rule.

The power struggle within the Chautala family led to differences between Chautala senior’s younger son Abhay Singh and his elder brother Ajay. This is JJP’s first election.

Throwing his weight behind the JJP, Kejriwal said that people used to make a mockery of the AAP when it was floated in Delhi.

However, in the 2015 Assembly polls the party got 67 seats as against three by BJP and nil by the Congress, he said

Claiming that the AAP has brought “revolution” in education and health sectors in the national capital, the Delhi chief minister alleged that the Congress and the BJP looted the country in turns.

“The entire country is looking at the result of the Jind bypoll. If the people of Delhi can change politics by bringing the AAP to power, I am sure that the people of Haryana can bring revolution and change the government,”