California Governor’s Tough Stance, Army will not Deploy in State Despite Trump’s Order

Opposition to US President Donald Trump's decision to deploy the military during violent demonstrations in the US continues to expand.

U.S. President Donald Trump returns to the White House after posing with a bible outside St. John's Episcopal Church in Washington, D.C., U.S., on Monday, June 1, 2020. Trump promised a forceful response to violent protests across the country before leaving the White House to visit a church across the street that had been been damaged by fires. Photographer: Shawn Thew/EPA/Bloomberg via Getty Images

Opposition to US President Donald Trump’s decision to deploy the military during violent demonstrations in the US continues to expand.  California State Governor Gavin Newsome has opposed this order on Sunday.  Also said his state would reject any attempt by the White House to deploy the military.  Two days ago there was a confrontation between the White House and the Pentagon over the matter.  Now voices are being raised against it in the states.  California has taken a tough stand against the White House. 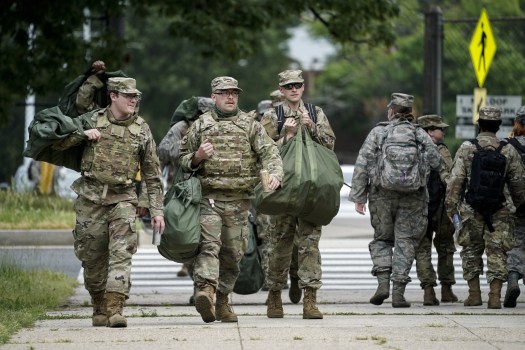 Significantly, tensions between protesters and local officials came down drastically last week after local politicians in California expressed a desire to introduce police reforms, but violence erupted in cities with President Donald Trump’s provocative threats and troop withdrawals and  The crowd had become uncontrollable.  After assisting civilian officers on the California streets for about a week, National Guard soldiers will begin to return with their weapons.  NBC News, quoting National Guard Adjutant General David Baldwin, also said that troops in all cities of the state would be evacuated via an email.

Protests continued for the 11th day in Los Angeles, the American’s second largest city, after the death of George Floyd, an African-American man in police custody.  On the other hand, the National Guard personnel deployed here to control the violent demonstrations have now been dispatched from the city.  Los Angeles Mayor Eric Garcetti said the National Guard was dispatched from the city on Sunday evening, but a contingent would remain in the city until June 10 to prevent protests and looting.

California Governor’s Tough Stance, Army will not Deploy in State Despite Trump’s Order